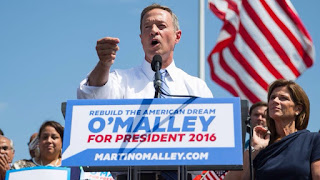 I agree with Eric Schnurer, that Martin O’Malley is an old-school Liberal. But we differ on what it means to be an old-school Liberal. Schnurer, seems to think that an old-school Liberal is someone who believes that government has a program that can solve every problem that comes up. That big centralized government has all the answers. That we’re always one new tax increase, or new tax, new social program, or new investment in a current social program from solving all of our problems. And this type of political thinking does have a label for it. But it’s not Liberal and liberalism is not that government and statist centric.

Jack Kennedy, when he ran for President in 1960, gave a speech at the New York Liberal Party convention. And he defined liberalism and liberal there. And I’m paraphrasing JFK, but he said that, “if liberal means someone whose soft on defense, irresponsible with tax dollars, believes in a superstate to solve everyone’s problems for them, then I’m not that Liberal.” Then Senator Kennedy went on to say, “but if a Liberal is someone who looks ahead and not behind, whose concern about the welfare of others, who believes we can always do better, than I’m that Liberal.” JFK, is Bill Clinton’s political hero and they think a lot alike when it comes to politics and policy.

Martin O’Malley, is not a Centrist and someone who is basically in the middle on most issues and perhaps leans left on social issues and leans right on fiscal issues. But he’s also not a Democratic Socialist, or perhaps even a New Deal Progressive. He’s someone who believes government can’t do everything, but can help people who especially need it move ahead, move forward and be able to live in freedom with the rest of the country. As his record as Mayor of Baltimore and then Governor of Maryland indicates. He’s someone who believes in making government work and making it efficient to serve as many people as possible. Not making government bigger, just to create more government jobs and spend more money.

Governor O’Malley, has been light on details as far as his presidential campaign so far. But I believe that is how he’s going to run for President. He’s not going to try to out Socialist the Democratic Socialist Bernie Sanders, or get stuck in the middle with Hillary Clinton. But you’ll see the JFK New Democratic Liberal leanings in him and policies. As someone who wants to bring young voters with him and show them how government can work to help people improve their own lives. Not to try to take most of their money from them and try to run their lives for them. And I believe he’ll be able to bring a lot of Democrats with him with that type of campaign.

Posted by Erik Schneider at 4:19 PM No comments: Links to this post