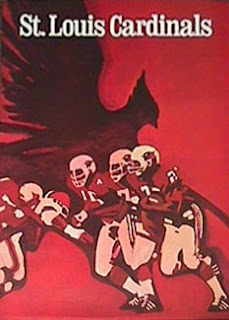 I remember the NFL’s St. Louis Cardinals pretty well, because I started watching football in the early and mid 1980s and even though the Cardinals are from St. Louis, they played in the NFC East with the Redskins. So I got to see the Cardinals twice a year for about six seasons. And I always remember them playing the Redskins very tough even though the Redskins were always better. The Redskins won two Super Bowls and won three NFC championships and the Cardinals made one playoff appearance, but they had three winning seasons. They were a very talented group that would win 8-9 games and barely miss the except 1982 under head coach Jim Hanifan. And I guess that is why I’m interested in a team that only made one playoff appearance in the 1980s.

The 1980s Cardinals, probably should have won more. They had an All-Pro quarterback in Neil Lomax. Who if his career wasn’t cut short due to injury is probably in the Hall of Fame today. If you look at their backfield they had OJ Anderson, who perhaps should be in the Hall of Fame today. Definitely one of the best tailbacks of the 1980s. Who had great size and power at 6’2 225 pounds, but was also fast and could run away from you. Very similar to OJ Simpson, Jim Brown, or Eric Dickerson. And they had Stump Mitchell behind OJ. Who was a great runner and receiver, similar to Joe Washington. And Neil Lomax had receivers Roy Green, Mel Gray and later JT Smith and tight end Pat Tilley. And a good offensive line with Hall of Famer Dan Dierdorf, Louis Sharpe and Joe Bostic. This was a team that had a lot of talent on offense and had good players on defense. Like defensive Freddie Joe Nunn and linebacker EJ Junior.

The 1980s St. Louis Cardinals, were very good and contended a lot, but they had a habit of putting scares into good winning teams that won consistently, but not enough to actually win the game. They would upset a very good team and then lose to a bad team. They either gave up on Jim Hanifan too soon, or replaced him with the wrong head coach in Gene Stallings. I think pretender is the best way to describe the Cardinals of this era. Seemed like every season they looked like they were good enough to win and would get back to the NFC Playoffs and maybe even win the NFC East. But they wouldn’t close the door and would lose at the last-minute. Make a key mistake when they couldn’t afford it. But similar to the New Orleans Saints pre-Jim Mora they were a fun team to watch. But only better than the Saints.

Posted by Erik Schneider at 5:08 PM