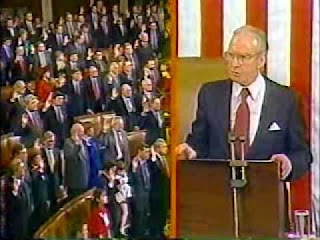 Early 1987 and really the whole 1987 year was a bad one for President Ronald Reagan and the Reagan Administration. Republicans, lost the Senate in 1986 which gave Congressional Democrats complete control of Congress going into 1987. Just when the Iran Contra investigation was in the news and when both the Senate and House was looking into that. The House and Senate put together a joint Congressional committee to investigate the Iran Contra situation in the summer of 1987. Where people like Marine Colonel Oliver North became a famous name and person and became a main focus of the Congressional Iran Contra Committee.

I was eleven years old and in fifth grade for most of 1987, so I don't remember a whole lot about the politics that year. I remember seeing some of the Iran Contra Committee with my parents on TV. I remember hearing about Gary Hart running for president and then dropping out because he was caught having an affair with a women who wasn't his wife. I remember hearing the name Michael Dukakis and a little about Robert Bork who President Reagan nominated for the U.S. Supreme Court. But most of these things except for Gary Hart and Mike Dukakis weren't good for President Reagan. And all issues that Vice President George Bush would have to inherit as he ran for president in 1988.

For really the first six years of the Reagan Administration, except for perhaps 1986 when Iran Contra became a big issue, President Reagan and his team were always on the offensive. And able to push their issues and get the country behind them in some key areas. They got their military buildup, tax cuts, Social Security reform, immigration reform, negotiations and better relations with Russia, to use as examples. But 1987 was the 1998 for the Reagan Administration. Where they played defense for most if not the whole year. Either answering questions they didn't want to answer, or trying to avoid questions that they didn't want to give the full truth on.

Posted by Erik Schneider at 4:22 PM