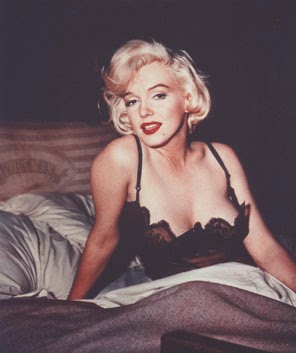 Marilyn Monroe, obviously this hot baby-face adorable goddess, who I at least believe never grew up personally and emotionally. Who’s personalty inside matched her baby-face on the outside, she wore her baby-face inside. And I’m not saying she had the intelligence of a teenage girl and that she was dumb and intelligent, which are some of stereotypes about her. What I’m saying is that she had not just the face of a teenage girl, or a young women in her early twenties, but she also had the maturity and emotional level of a women that young. So to hear stories about her thinking she’s going to be President of the United States girl, a man who is already married, doesn’t surprise me at all.

Marilyn was again this hot baby-face goddess. Arguably at least the prettiest and sexiest women of all-time and certainly one of the cutest and sweetest, physically and emotionally as well. When you are someone like that and you also have the emotional level of a sixteen or seventeen year old girl, why wouldn’t you think you could have any man you want, including the President of the United States. Including President John F. Kennedy, who was known to having affairs even as President and even in the White House with other women. Why wouldn’t you think you could at least have the same thing with Jack Kennedy.

As reckless and irresponsible as Jack Kennedy was as an adult, he was smart and responsible enough to know that Marilyn would never happen with him. That having at best a casual friendship and the rumors about both of them together, were fun, but that getting involved in any real way with her, would be a nuclear disaster in downtown Washington waiting to happen for him. Because of all of her immaturity and personal baggage that came with her. I mean this is a women who committed suicide the same year of his famous birthday party. He didn’t want any real affair with her.

Posted by Erik Schneider at 4:03 PM No comments: Links to this post