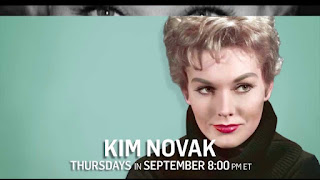 This piece was originally posted at FRS Daily Press on WordPress: Scott McGee: Kim Novak: TCM Star of the Month For September

A gorgeous sexy baby who always leaves you wanting to see more of her movies and appearances. I haven’t seen many women who are that gorgeous, sexy as well as baby-face adorable. Who makes her characters seem so real, because he makes her characters part of her which is how Kim Novak acted and why she’s been so successful. The phrase always leaves you wanting more can almost sound negative if not insulting. Because it implies someone, or something is not good enough. But in Kim Novak’s case that means she’s so hot and great that you want to see as much of her as possible. Like in, “please don’t go away.”

I believe Kim Novak is almost an under appreciated Hollywood Goddess and actress, because she gave up her career pretty quickly. She was finished acting by the late 1960s when she was in her mid-30s when she probably would have at least one if not two more great decades ahead of her where should could have had a great movie career. Or perhaps done TV as well and had a whole list of great roles in front of her. Because she was versatile and could play anyone. That goes to the always leaves you wanting more. Because she was so good and looked so great that you never wanted to see her go away.

Kim Novak or Baby Kim as I call her, is truly one of the best actress’s I have ever seen and one of the best looking. This hot baby-faced adorable women with the great body who was also a hell of an actress who again made her characters seem and brought them to real-life. Who also had this adorable silly side that could make you laugh. And yet her career as an actress was only about 10-15 years and that might even include her brief return in 1985 to work on prime-time soap operas. Who could have had a long great career and be remembered as one of the best actress’s of her generation if not all-time.

Posted by Erik Schneider at 7:03 PM No comments: Links to this post