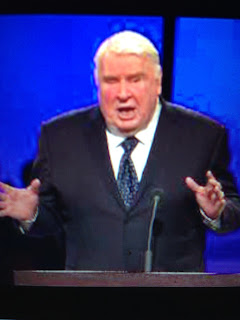 Source: This piece was originally posted at FRS Daily Press Plus

As John Madden said, Pat Summerall’s long time partner on the NFL on CBS and then later on FOX NFL Sunday when they were the lead announce team for CBS Sports and FOX Sports NFL coverage, Pat Summerall was the voice of the NFL. Because, one he did have a great voice for TV or radio, but he knew what we was talking about. He not only knew what he was seeing and could describe it so well, but he knew what it meant. You got an insiders look from Summerall because he played the game himself and knew what he was seeing and what it meant.

Its almost as if you were hearing one man give the play by-play as well as the analyst in one voice. And then you add in John Madden perhaps the best sports analyst of all-time not just the NFL. And you are talking about a great team and watching a football game from two announcers who not only knew what they were looking at, but what it meant. And other than maybe with Frank Gifford and Don Meredith doing ABC’s Monday Night Football, its something that was never seen before except for Pat Summerall and Tom Brookshier working together, again at CBS Sports. To have both an announcer and an analyst know so much about the game and sport they were calling.

Pat Summerall was an analyst calling NFL football because he played the game himself as a kicker and I believe a linebacker with the Chicago Cardinals and later of course the New York Giants. Where became somewhat famous and successful as a player. So listening to Summerall call NFL games, was a real pleasure because it wasn’t a fans point of view. Some broadcaster who just loves the sport and his job, but perhaps knows as much about the game as his audience.

But with Summerall you were listening to an expert not just doing the play, but someone who would analyze what he was seeing. Because he not only knew what he was seeing and what it meant. And I feel so lucky and it was such a pleasure to hear him call all of those NFL games. Because he and John Madden were the number one announce team for the NFL on CBS and later FOX NFL Sunday. So you got to see them practically every Sunday. But also as a Redskins fans whose team played in so many NFL games of the week on CBS.

Another thing I take away from Pat Summerall was his intros which were great and famous. Because they were so natural as if Pat Summerall wrote those intros himself and added his own humor to them. And then you throw in the great theme music from CBS Sports and you got to hear the voice of the NFL at his best. Laying out perfectly what to expect from the upcoming game and what to look for from both teams. And what made him so great and best NFL announcer of all-time.
Kyle Summerall-NFL Network: John Madden's Eulogy of Pat Summerall

Posted by Erik Schneider at 3:37 PM