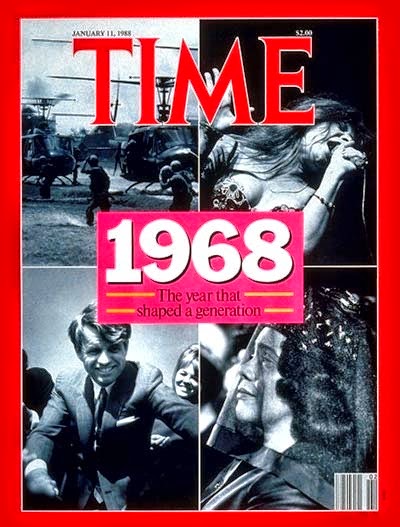 I think one thing that separates America and makes us stronger than anyone else is that we can go through a year like 1968 and get through it and survive it. And still remain one country, unlike other countries that tend to go through such division between the people and their government and overall establishment of the country in one year and you see them come apart. With the government falling and perhaps even leading to some type of civil war. Egypt comes to mind pretty fast and what is going on in Syria and Venezuela right now are other good examples.

Having said all of that, its hard to find anything good about 1968 other than maybe the music and the fact that we started to get along better as far as race relations. Where racism and other types of bigotry started to really go out of style. And bigots were left to hide their bigotry or pay serious prices for it. But other than that 1968 was one big disaster after another. A year full of violence with murders and assassinations, the President of the United States deciding not to even bother running for reelection because there were so many people who literally hated him in both parties.

And that is just about the domestic scene in America, but then you go to the Vietnam War itself with Americans finally figuring out that we are not just losing the war, but it is probably lost. And we started seeing all of those dead American soldiers coming home from it. I guess one good thing about 1968 is that Americans finally woke up. And figured out that their government not only doesn’t always tell the truth, but they even lie to their people. The Johnson Administration saying that they were making progress in Vietnam when they knew the opposite was true and that Communist Vietnam was getting stronger.

1968 represents the 1960s as well as it could possibly be. A year of revolution, protest, violence, people coming together from multiple races to be part of the same movement. Where millions of Americans became free to be themselves and no long feel like they had to live a certain way of life in order to fit in or even be good people. 1968 was a shakeup of the entire United States and perhaps was something that the country needed. Even with all the violence and the lost of lives in that decade so Americans would know about the problems in the country, but also what could be done about them. And what also makes us great as a country which is our freedom and diversity.
Bob Parker-CBS News: 1968, a Year That Changed America

Posted by Erik Schneider at 1:42 PM No comments: Links to this post