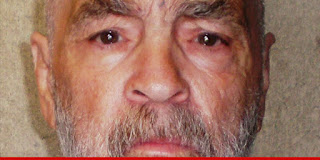 Charles Manson has been in prison for his current sentence of forty-two years. After being convicted for his part in the Manson Family murders of the late 1960s. He is now 77 years old, so just for is current prison sentence alone, he’s been in prison for more than half of his life. And the last time he was a free man from the mid 1960s, after being paroled from prison in Washington State, to the time he was arrested in 1969, for his role in the Manson Family murders, that’s really the longest stretch he’s ever been free at any point of his life. It’s not just that Charlie Manson has spent most of his adult life in prison he’s spent most of his life period in prison. He’s exactly where he belongs, he’s never shown the ability to be productive on the outside, without hurting innocent people, or having them killed. Charlie Manson is not in Prison for actually physically committing the murders. He’s in Prison for conspiring the murders, for inspiring others to do his evil work.

Charlie Manson was originally sentenced to Death for the role in the Manson Family murders from 1969. So were his co-defendants Leslie Van Houten, Patricia Krenwinkel, Charles Watson and others. But then California outlawed the death penalty shortly after their sentences. So their sentences were changed to life in prison with the possibility of parole. none of the convicted murderers have been paroled and they will never be. But imagine that, you’re responsible for intentionally killing not just one innocent person, but innocent people and not only is your life spared, but you actually have a shot as small as it is, of one day being free. Even though your victims will never be free from the crimes you committed against them.

The Manson Family is lucky to even be alive right now and that’s the best they’ll ever do. You can make a good case that sparing the lives of Leslie Van Houten and Pat Krenwinkell, was a a good move. Both have made productive use of their prison sentences. Both completed college in prison, both hold good prison jobs. Both have shown they are now rehabilitated and probably no longer represents a threat to society. And both have shown remorse for their crimes. But Charlie Manon is exactly where he belongs and is lucky to have whatever time he has left to be alive in Prison. He’s shown no remorse or admitted any responsibility for his crimes.

Posted by Erik Schneider at 2:09 AM No comments: Links to this post