NFLN: A Football Life-John Riggins- The Diesel Engine That Powered a Team and Career 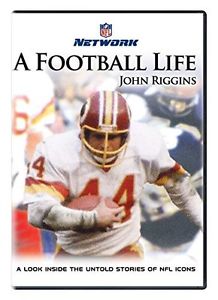 This piece was originally posted at FRS Daily Press

I guess I'm very lucky as a Redskins fan, because my first year as a Redskin fan and I'm not even seven years old, yet a couple months away from that, was in 1982 the year the Washington Redskins win their first Super Bowl. I still remember John Riggins touchdown run like I saw it yesterday. Him breaking through that hole, that was designed on purpose to have one free Miami Dolphin defender, who was a safety a guy named Don MacNeil, who may have weighed 200 pounds back then. It was designed this way because Redskins OL coach Joe Bugel tolled JR, "look, there's going to be one free Dolphin defender who'll have a clean shot at you, but there isn't a DB in football that can tackle you by themselves." JR was called the Diesel for a reason, because thats the type of power he had. I think a better comparison would be a horse. Big, tall and strong, who could run like a horse. He would run through you or he could run by you. You try to tackle him, you have a better shot at hurting yourself.

When you think of John Riggins athletically, just don't think of the Super Bowl champion or the Super Bowl MVP. Or the Hall of Famer or even all of the records he held at least one point. Think of the athlete, think of the 18 year old who at the time was already 6'2  220 pounds, who was the Kansas state track champion in high school. Think of a fullback with tailback speed, who could out run WR's and DB's. And also think of JR from the perspective of a defender. "Even if I do catch this guy, if he's not at full speed, how am I supposed to bring him down. Maybe I should practice by trying to tackle a horse." A couple examples of JR's greatness, a regular season game against the Dallas Cowboys in December 1979. The winner of the game wins the NFC East and goes to the playoffs. It was the third or fourth quarter, QB Joe Theisman calls a trap play or a run up the middle. The problem is that JR out ran his OL. And turns the play into a sweep and bounces outside and takes the play for a sixty yard touchdown run. No Cowboy in sight trying to catch him until the end when a little Cowboy DB makes light stab at him.

Jim Brown is the best RB of all-time, the power back of all time as well, but JR is right behind JB as the best power back of all-time. And if you are number two to JB in anything when it comes to football, you are a Hall of Famer. The only thing was that JR was under utilized for probably half of his career. The New York Jets were awful in the early and mid 1970s and the Redskins tried to make JR a FB in his first two seasons in Washington. So my question would be had JR been a full-time TB for his entire career, how great would he have been.

Posted by Erik Schneider at 7:20 PM