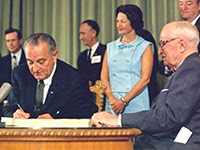 When President Lyndon Johnson signed the Medicare bill into law that guarantees health insurance for senior citizens provided by the Federal Government and financed by an increase in the payroll tax, President Johnson finished off part of President Harry Truman’s presidential legacy. His Fair Deal agenda that he tried to pass through Congress. But since the Republican Party took control of Congress in 1947 and with President Truman’s unpopularity, he wasn’t able to pass it through Congress.

Lyndon Johnson was actually in Congress during the Truman Administration both House and Senate. Elected to the Senate in 1948, actually served in Congress during the entire Truman presidency. And was in House during the first four years of the Truman Presidency. Both Truman and Johnson were New Deal Democrats on economic policy. So signing Medicare into law in I believe was a big deal to both Truman and Johnson and why President Truman was at the Medicare signing ceremony.

Health insurance for senior citizens is something that both Truman and Johnson were fighting for a long time. But a couple of Republican Congress’s, one in the late 1940s and another in the early 1950s, as well as the Eisenhower Administration, got in the way of Medicare coming into law. Actually President Truman wanted to go farther and create a single payer health care system, but for the same reasons wasn’t able to get that done.

The legacy of Medicare I believe overall is pretty good, because it’s guaranteed health insurance for senior citizens as it was intended to. It wasn’t designed to become a single payer health insurer. That would essentially be the sole health insurer for everyone in the country. And outlawing private health insurers. If President Johnson wanted to do that, he probably would’ve proposed that. Because he had huge 2/3 majorities in the House and Senate up until 1967. When Congressional Republicans picked up a bunch of seats in both the House and Senate.

Perhaps President Johnson didn’t have the votes for Medicare For All, with probably all Congressional Republicans voting against it, led by House Minority Leader Gerry Ford, Souse Minority Leader Everett Dirksen, Senator Barry Goldwater and others. As well as the Southern Caucus of Democrats in Congress. Medicare has been very positive in guaranteeing health insurance for all of our senior citizens and at the time was considered revolutionary. But today would seem somewhat mainstream like and not trying to upset anyone or chop down a tree. But something that a consensus of Americans would support.

Posted by Erik Schneider at 3:19 PM No comments: Links to this post