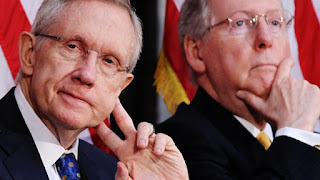 This piece was originally posted at FRS FreeState Plus

It’s all about politics right now for Democrats. “How to get President Obama reelected, how to keep control of the Senate and how to retake control of the House. And once again have all the power going into the 113th Congress.” The White House and Congressional Democrats don’t believe they have an agenda that they can sell to the American public, or that they can get out of Congress right now. With a GOP House and a large Senate GOP minority that can block anything. And neither party believes they can compromise, because they are worried about offending their fringes in their parties. And risking a primary challenge in 2012.

So the reason why the White House and Senate Democrats aren’t pushing any major legislation right now, is they don’t believe they can pass anything or get the sixty votes in the Senate to prevent the Senate GOP from blocking it. And they are expecting the House GOP to self-destruct on their own and don’t feel the need to counteroffer. House Democrats were whipped in the 2010 mid-term elections, losing over sixty seats and are no longer in power in the House. Senate Democrats, still in the majority, but no longer have a large majority. House Republicans feel they have the wind at their backs now and can force the Senate and President Obama to at least take stands on their policies. And we’ll see how far they’ll try to push their agenda that isn’t very popular even outside of the Tea Party. And at what cost to them.

Posted by Erik Schneider at 5:36 PM No comments: Links to this post