C-SPAN: Q&A With Brian Lamb- Mick Caouette on Hubert Humphrey: The Art of The Possible 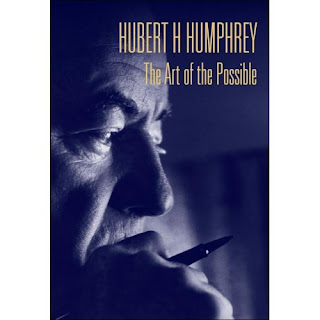 The Art of the Possible, which is the name of a documentary about former Senator and Vice President Hubert Humphrey, I believe is the perfect way to describe Hubert Humphrey. Because that's how Senator Humphrey saw politics and government. Serving the people and trying to solve problems that they face. He didn't see government as a debating Society, where Democrats and Republicans, Liberals and Conservatives, bashed each over the head. With neither party having enough power to destroy the other party. But he saw government as a way to try to solve problems, analyze the issues, examine what the political situation is between both parties and try to find solutions that can pass through Congress and that the President would sign. And Hubert Humphrey had plenty experience at this. Being in Congress for twenty five years and being the Assistant Leader of the Senate from 1961-65. Leader Mike Mansfield's deputy and then Vice President from 1965-69.

Hubert Humphrey was pretty busy in that time period with the civil rights legislation. The civil rights debates actually were going on in the late 1940s. When Hubert Humphrey was elected to the Senate and he made his famous pro-civil rights speech at the 1948 DNC. And the 1964 Civil Rights Act where Humphrey had a big role in getting that bill passed. And ending the Senate filibuster from the Southern right-wing Democrats. And helping to bring aboard some Northern Progressive Republicans. And as Vice President he had a role in getting the 1965 Voting Rights Act passed as well as Medicare health insurance for senior citizens. But I believe Hubert Humphrey's legacy in Congress was the civil rights legislation. Who without him those bills never get passed.

Hubert Humphrey had the perfect approach to civil rights, because he saw it as about human and constitutional rights. Which trumps states rights, which was of course the argument that the Southern Dixiecrat Democrats were making. That the states had the right to enforce constitutional rights as they see them. Even if it violates constitutional rights of African-Americans and other racial minorities. But the Republican Party of the 1960s even though they were the opposition party from 1961-69 and were a small minority party in both the House and Senate for the whole decade, deserve a lot of credit in Congress for those bills being passed at all.

Congressional Republicans like Senate Minority Leader Everett Dirksen, deserve a lot of credit for getting the civil rights legislation passed as well, because they don't pass in the Senate. Without Senate Minority Leader Everett Dirksen, who without him these bills never get passed in this era. Hubert Humphrey tends to get lost when we are talking about great politicians and public servants for whatever reason. But without him a lot of important legislation never gets passed. And a lot of Americans would've been denied their constitutional rights as a result, just because of their race. Which would've been a disgrace in a liberal democracy like America.

Posted by Erik Schneider at 5:59 PM