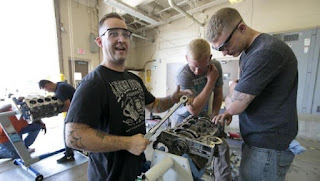 The fact that the Federal Reserve is considering raising interest rates, tells me as a non-economist that the American economy is starting to do well. That people are going back to work, that their incomes are rising and spending money. The Fed, has kept interest rates at practically nothing since 2008 when the Great Recession started, because the economy for most of this period was pretty weak. 2010 and 2014 would be exceptions to this, but by in large economic growth has been fairly weak since the Great Recession even with job growth being steady and solid since 2010. Which tells me we can forget about another recession at least in the short-term.

Congress, has lately has started to become helpful with the economy. They passed another short-term extension to the highway program. The Senate, passed a a six-year highway bill last week that is fully paid for. The House, is going to take up that bill and hopefully pass their own bill when Congress comes back from recess in September. So we're starting to see some real healthy signs with the economy. That even though the economy actually shrunk in the first quarter this year, the economy by in large is ready to do well and hopefully take off again. And do well for the rest of 2015 and hopefully take off next year.

Kids going back to school in September so there will be a lot of back to school sells for the next couple of months. As well as this being August and Americans still vacationing. And then once we get through September and October we're into the holiday season. And then you may actually see the Fed raise interest rates. So I believe there are plenty of reasons to be optimistic about the American economy right now. And with a healthy economy would also mean the budget deficit will continue to fall and we'll see more investment in America as a result.

Posted by Erik Schneider at 4:36 PM No comments: Links to this post