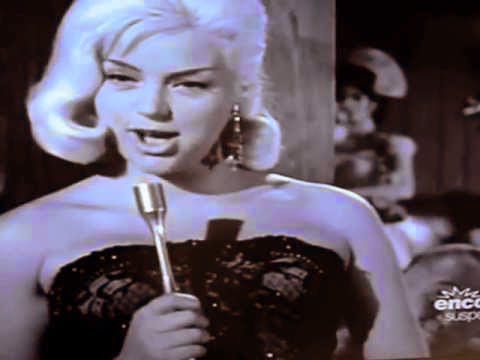 I think Run For Doom is Alfred Hitchcock at his best because you see the full-scale of what he wanted to give his audience. A suspense/thriller involving people who were not saints or angels and not devils either, but real people who tend to be somewhere in between. With clever writing and a lot of humor and the female lead being a goddess. A gorgeous sexy women who is also very adorable and yet very clever and witty. Which is Diane Dors at her best, Jayne Mansfield who was also on this series and several other women who appeared on this series.

Run For Doom is about a nightclub singer with a bad history of marriages and relationships where the men in her life do not survive the relationship. And she walks away with a lot of money from the experiences. Diana Dors plays Nikki Carroll the nightclub singer and she’s performing one night and is introduced to a young doctor. Dr. Don Reed played by John Gavin and they naturally hit it off. Reed being a doctor is probably Nikki’s main interest him, but he’s a young doctor who doesn’t have a lot of money yet.

Dr. Reed has an ailing very wealthy father and his relationship with Nikki goes well enough for him to want to marry Nikki. Reed has gotten several warnings about Nikki’s history with men and her dead husbands and is warned not to pursue her. But I guess he’s blinded by his love for a women who doesn’t love him and decided to propose and marry her anyway. Reed’s father dies after finding out that his son is going to marry Nikki and now Reed is a very wealthy man. And naturally Nikki looses personal interest in Reed and looks to get out of the marriage.

Nikki has something that she can blackmail her husband on. Dr. Reed accidentally killed someone on their honeymoon by pushing a man over the cruise boat that they were on. And they didn’t bother to report the incident. Nikki tells the doctor to give her his money or she’ll report the killing to the police. Nikki also has a long-term on and off again boyfriend who wants her back. And knows what she is up to with her husband and decides to step in to get a piece of the action. And they have a physical struggle that leads to him strangling her and thinking he killed her.

To be honest with you, Diana Dors was the main reason why I’m so interested in this show. But it is a very entertaining and at times a pretty funny show as well. With Diana playing a women that is so cunning personally and bright and yet she looks too sweet and cute to hurt, let alone kill anyone. And yet she has a history of dead boyfriends and husbands. But in this marriage she is the one who doesn’t survive the affair.

Posted by Erik Schneider at 2:46 PM No comments: Links to this post

"Jaclyn explained her approach to beauty is a lifestyle of healthy choices and an easy to follow routine, like her own skincare line, which she developed a collection of crèmes and lotions with clinically proven ingredients."

The title says it all about one of the best overall looking woman of all time. Here’s a woman whose going to be 70 in October, 70 years old. A gorgeous and still baby-faced adorable red-head who if anything is actually sexier now than she was in the late 1970s when she became a star on Charlie’s Angels.

Jaclyn and Raquel Welch, they seem to refuse to age. As Raquel has put it several times, looking good is her job. That is what she does and has all the motivation to look good and take care of herself, because it is how she makes her living as a businesswomen and someone with her own fashion business now. I believe Jaclyn Smith is in the same category. That looking good and fashion is her business. And the best way I think she believes she can promote that is looking as good as she possibly can herself.

There isn’t a better woman that could have coined Ageless Beauty, or could have had that term named for her better than Jaclyn Smith. She’s been in Hollywood , the entertainment business and fashion industry, for over forty years now. Before I was born I’m sure, which makes me feel a little younger and yet she still looks 10-15, maybe even twenty years younger than she actually is. Here’s a woman who was born at the end of World War II which was seventy years ago and she looks better today than probably most women young enough to be her daughter.

And I’m sure many women young enough to be her granddaughter as well. She’s the definition of ageless beauty and 10-15 years from now will probably still be modeling her own products, because she’ll be able to give people personal experience that they work.

This is going to sound corny, but so what, because it’s so true. You’re as young as you feel and age really is only a number. I’ve seen men and women in their late thirties and early forties who are going gray already. Men that young, going bald who look 10-15 years older than they actually are. From either drinking and smoking too much, or both, perhaps using harder drugs, not eating right, not exercising, not managing stress, etc.

And I’ve seen men women who actually are as old in years as younger people, who look as old as they actually are, who look as young as the younger people who’ve aged too fast. And why is that, because time machines haven’t been invented yet. The younger looking healthier looking people like Jackie Smith, take care of themselves. They enjoy life while actually taking care of themselves. Instead of seeing how hard they can live before they die.

Posted by Erik Schneider at 5:02 AM No comments: Links to this post