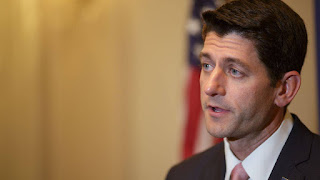 After spending a few months trying to lead the Tea Party and rest of the House Republican Conference, which might be harder than trying to lead a pack of wild horses for the very first time, new Speaker of the House Paul Ryan might be looking for an escape tunnel in the Speaker’s office. “What have I gotten myself into? I can’t lead these people, no one can. It’s like trying to tell Anarchists what to do.” Speaker Ryan’s first quote walking into his first House Republican Conference meeting as Speaker. Well according to The Onion anyway. But The Onion is more reliable than Fox News and MSNBC combined.

Speaker Ryan, is going to have to lead a pack of wild wolves and get them to do things that they see as sinful. Like funding government agencies, because you have to know that the House Tea Party Caucus, doesn’t believe in governing. Even though they supposedly serve in government. Just one of their ironies. He’s going to have to lead a Republican Conference that has no problems shutting down the government, even if it means getting exactly what they don’t want at the end of the day.

Paul Ryan, is no longer chairing the House Budget Committee or the Ways and Means Committee. Where he can get away with passing legislation that will pass with only Republican votes in committee and then pass on the House floor on a party-line as well. And watch it die in the Senate like fish out of water. As Speaker, Ryan is responsible for passing legislation that can become law. Pass the Senate and then be signed by the President as well and of course pass in the House. And that means working with who the Tea Party sees as a Socialist Muslim Devil. Who secretly funds ISIS to kill Americans. Thats right, President Barack Obama.

And to do these things he’s going to have to do a couple of things that are seen as four-letter cuss words with the Tea Party. Govern and compromise with Democrats. Even though govern has six letters and compromise has ten letters. A little Tea Party math for you and these things won’t be easy for him to do. The Tea Party sees themselves as Middle Eastern dictators, even though most of them are of Anglo-Saxon Protestant background and are House backbenchers. Not even freshman senators and live by the childish code, “if I can’t have that house, burn it down.”

It’s not so much Paul Ryan I’m making fun, but the people he’s now responsible for leading. Ryan, I believe is a good intelligent man who sees himself as a legislature who may end up dying in Congress even if his whole career is in the House, because he loves it so much and wants to do the right things. But like with football, a coach is only as good as his staff and his players. Then its up to him to get the most out of what he has to work with. And like with Congress a leader is only as good as his staff, his leadership team, his committee chairman and his troops.

Trying to get the Tea Party to compromise on anything is like trying to tell kids they can’t have cake for dinner and have to do their homework before they play video games. Speaker Ryan is going to hand his hands full and I wish him the best. Because for government to work, he’s going to have to be able to work with Democrats and then sell that to his troops. He’s going to have to tell his troops to vote to fund government agencies that the Tea Party believes doesn’t exist, at least in the U.S. Constitution. Which is like trying to sell broccoli for desert and doing your homework for fun to ten-year olds. Lets wish the new Speaker the best, he’s going to need it as well as the luck of the Wisconsin Irish and perhaps some Jack Daniels whisky as well.