The Economist: Video: The Real Cost of The War on Drugs 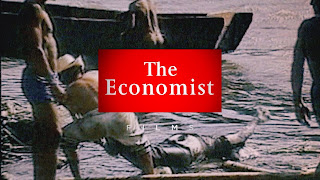 The Economist: Video: The Real Cost of The War on Drugs

America, at least at one point and perhaps they still are, was the biggest consumer of narcotics, legal and otherwise, in the world. One reason why you see so many drug dealers, drug lords, drug terrorists in Central America, the Caribbean, Columbia and other places in South America. Because they want to get their dope to the United States. Because they know how much of that Americans consume. I’ve made this point so much, but once you prohibit something, doesn’t mean it goes away. It means it goes underground. Where people can’t see it and find it. Where the only rules that are in place, are made and enforced by drug dealers.

The War on Drugs and drug terrorists, almost destroyed the Republic of Columbia in the 1990s. And they still have issues with their War on Drugs and terrorists down there. Why, because Columbians, other South Americans and Americans, still want their narcotics and want them badly. The War on Drugs, is not a real war, but America has been fighting this so-called war since 1971. Spending trillions of dollars on it and the problems have only been made worst. Just because you threaten to lock someone up for what they do to themselves, especially if they’re addicted to what they’re on, doesn’t mean it goes away. Just means people are now putting their freedom at risk and risking incarceration, to do their drugs.

The real costs of the War on Drugs, is a lot more money on law enforcement and incarceration, that taxpayers have to pay. A lot more Americans in prison for simply consuming drugs and what they’re doing to themselves. People who otherwise could be productive members of society if they weren’t in prison. People, that had they been sent to drug rehab, or a halfway house, instead of prison, could’ve beaten their addiction and been able to move on with the rest of their lives. But now have seen their addiction get worst and are now convicted felons with a prison record. Whose going to have a hard time making it on the outside when they get out. Even if they beat their addiction. So the real cost of the War on Drugs, is immense. And something Americans taxpayers have to pay for everyday.

Posted by Erik Schneider at 4:10 PM

Email ThisBlogThis!Share to TwitterShare to FacebookShare to Pinterest
Labels: The Economist