If you look at the 1979 Redskins, not a deeply talented team with great players at every position. Their leading receiver Danny Buggs, caught 46 passes the whole season. They were primarily a power run ball control football team on offense, led by the great fullback/tailback John Riggins. With a short passing game where they threw a lot to their running backs. And a team on defense, that was solid against the pass and somewhat weak against the run, that caused many turnovers. They along with the Tampa Buccaneers were the surprised teams in the NFC in 79. Two teams expected to not do much of anything going into the season and they both won 10 games.

The Dallas Cowboys in 79, were defending NFC champions as well as NFC East champions. And were looking to get back to the Super Bowl and perhaps were the favorites going in. They were once again very good on both sides of the ball. QB Roger Staubach, at 37 and in his last season, was perhaps still the best quarterback in the NFL at this point. And he still had the great Tony Dorsett and Robert Newhouse at running back. And Tony Hill and Drew Pearson and Bill Joe Dupree as his receivers. And they still had the Doomsday Defense. With Randy White, Ed Jones, Harvey Martin and Larry Cole upfront. They were still a very good football team.

But one of the things that made the Redskins-Cowboys rivalry great in the 1970s and 80s and I believe the best rivalry in the NFL at this point, was that both teams didn’t need to be great on paper and deep in talent for the games to be great. Both teams didn’t even have to be good for these games to be great. The 3-13 Cowboys, beat the defending Super Bowl champion Redskins in 1988. And that is just one example. And this is an example of that, where the Redskins had a good record in 1979, but didn’t have great personal. But had enough good players and a few great ones and great coaching to make this team play better than their talent perhaps says they would. Which is why the Redskins played so well against the Cowboys in 79. 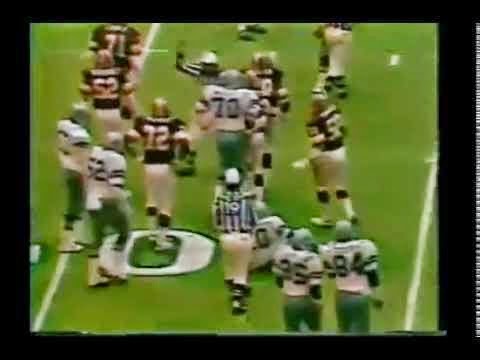 Posted by Erik Schneider at 2:37 PM