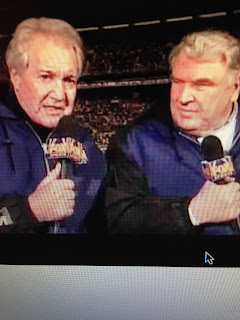 As Pat Summerall’s former partner at CBS Sports and FOX Sports during the NFL season John Madden said, “Pat Summerall was the voice of the NFL. The best whoever was and is when it comes to calling NFL games.” Because he had a great voice and also because he knew what he was talking about. He was the play by-play announcer with an analyst’s voice because he not only could see what was happening, but he knew what it meant because he use to play the game himself. So you were getting an insiders look not just from the analyst, but the guy calling the game. Similar to Frank Gifford when he did play by-play for ABC’s Monday Night Football. Frank Gifford not only being a great announcer, but a hall of fame player for the New York Giants and a teammate with Pat Summerall.

I also feel lucky to be able to hear Pat Summerall as the lead play by-play announcer when I did. He and John Madden became partners and CBS Sports lead announcers for the NFL on CBS in 1981 or 82. Which meant they got the top game in the National Football Conference every week. My first year watching football was in 1982 just as the Redskins my team were starting their big run in the 1980s. Winning two Super Bowls in that decade and three NFC Championships. So I got to see Summerall and Madden calling a lot of Redskin games that decade.

And it seemed like every Sunday at one point Summerall and Madden were calling the Redskins game and they were either playing the Giants or Cowboys or Eagles on Sunday afternoon at 4PM. And if they weren’t playing at 4PM they were the Monday Night or Sunday Night game. A big reason why I fell in love with football so early in life was because I was fairly athletic early on as a kid. And enjoyed playing football for fun, as well as the Redskins being so good early on. But also because I got to hear the best broadcast duo of all-time calling so many Redskins games.

When I think of Pat Summerall I think of the voice of the NFL and especially the voice of the NFL when it came to intros to games. And a lot of those intros involved Redskin games. Again I feel lucky to of heard him call so many Redskin games, because he would do the intro almost as if he wrote it himself. It seemed so natural to him and his ability to deliver when it came to calling game action. Or talking about the NFL seemed so natural which is why he is the voice of the NFL. And while he be missed because there will never be someone as good and as talented calling NFL games.
NFLN: Pat Summerall- A Life Remembered

Posted by Erik Schneider at 2:41 PM No comments: Links to this post


This was an end of an era because this would be the last time that the Giants and Bears would play each other for the NFL Championship. Because even though both teams were still competitive for the rest of the 1960s, they were no longer NFL Championship contenders. And by 1970 they were now playing each other in the same conference what is today known as the National Football Conference, after the NFL/AFL merger. So the 1963 NFL Championship wasn’t the end of one of the best NFL rivalries, but it certainly changed and was no longer very important as far as the current league. Because both teams were fairly mediocre for the rest of the 1960s. Both teams were bad in the 1970s, only making the NFL Playoffs a total of two times. The Bears both times in 1977 and 79. With both clubs not becoming contenders again until the 1980s. 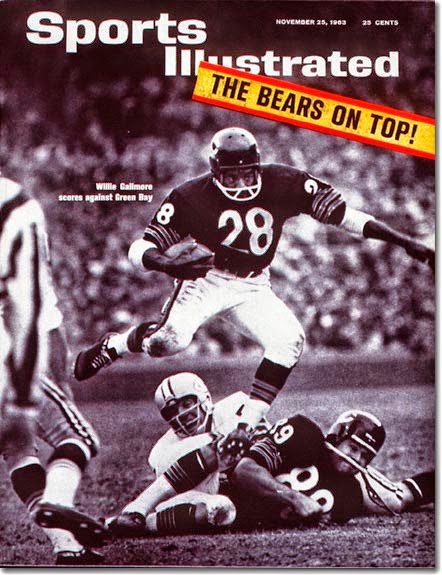 Posted by Erik Schneider at 10:52 AM No comments: Links to this post