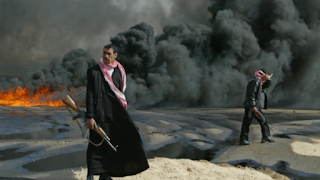 The Iraq War is a tough issue for me. Because pre-Iraq invasion and up until the summer of 2003 when it was discovered that there were no more weapons of mass destruction in Iraq and that the Saddam Regime was so weak that it couldn’t defend itself and probably could’ve been taken out by what’s going on currently in Syria, or what happened in Libya by simply arming the Iraqi people and having a civil war and of course all the money that was not only spent but borrowed that American tax payers are going to have to payback, I was in favor of it.

Congress and the American people simply didn’t have enough information to make a decision like this and that had we just spent 3-6 months, or taken all of 2003 even to think about this, if we just had more information and better information, I don’t believe Congress approves of this war. Even if Republicans controlled both the House and Senate when. I’m not trying to sound like John Kerry from back in 2003-04 and say I was for it before I was against it, but that’s exactly my situation. And I’m not trying to make excuses about why I was for it.

I thought after 9/11 that weapons of mass destruction in the hands of a Baathist dictator in the heart of Arabia in a big country the size of Iraq, we are talking about California here, with the Islāmic terrorists in the area, would be bad for not only the broader Middle East but for America as well. Because Saddam’s regime was so weak at the time and could’ve used the money that would come from selling his weapons to terrorists groups and other authoritarian regimes. What I didn’t know and this comes from not doing all of my homework is that Saddam no longer had any WMD and didn’t have connections with terrorists groups at all.

One of the legacies of the Iraq War is that there were many mistakes made upfront and have Bipartisan hands written on them. Like the fact that the Democratic Party led at the time by Tom Daschle controlled the U.S. Senate and that there was a divided Congress as a result. So Senate Democrats led by Leader Daschle could’ve simply said no to the Iraq War and killed it in Congress by themselves. Takes both chambers of Congress to write laws, but it only takes one chamber to kill laws and resolutions.

Senate Democrats could’ve simply said, “no, we are not ready to do this. Congress doesn’t have all the information that we need to make this decision.” And Joe Biden, Carl Levin and Bob Graham Chairman of the Senate Foreign Relations, Armed Services and Intelligence Committees could’ve spent the last couple months of that Congress in 2001-02 holding hearings to get more information about Iraq. And the situation it was in financially, militarily and everything else.

The legacy of the Iraq War is really about bad intelligence and not having enough solid information. How we not know going in that Saddam was as weak as he was and his country was as weak as it was. How we go in there without enough people to occupy this big country and not knowing that the Iraqi people weren’t ready to govern themselves. Takeover the military and law enforcement agencies and govern the country and the provinces and so-fourth. And how we not know how weak their economy was especially in the energy sector where this country should be energy independent.

All of these things we should’ve known especially Congress upfront before you commit your country’s resources and manpower to invade a country like this. Had we had this information upfront we would’ve known that Saddam isn’t a threat to anyone outside of his country. The legacy of the Iraq War on the positive is that one of the worst dictators and serial murderers and tortures of the 20th Century was eliminated allowing for a country rich in resources and in people to do very well.

With a real shot at a bright future, but at heavy cost for the Iraqi and American people. In lost treasure and in money and lives and for the most part. The lessons of it are how not to invade a country and do your homework and get all the needed information available and decide based on all of that. Is it worth it or not and go from there.

Posted by Erik Schneider at 3:15 PM No comments: Links to this post