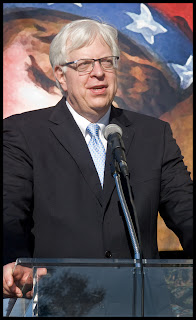 Anytime I hear someone on the right however they define their politics unless they say they are classically conservative or conservative libertarian or just libertarian, say they believe in individual freedom and are against big government, I want to know where they stand on the War on Drugs, especially as it relates to marijuana. Because people on the right unless they are actually conservative in the real sense, tend to speak in favor of choice and letting the individual decide, except when it comes to the War on Drugs and marijuana. Economic freedom especially as it relates to opportunity for people who need it and not overtaxing and regulating is critical.

But the ability for people to be able to make their own decisions with their personal lives and have personal freedom is just as critical. Without big government interfering with how they live their lives. What Dennis Prager and I guess Neoconservatives on the right as much as they talk about individual freedom and the need for it, at the same time they bash Liberals for embracing individual freedom and freedom of choice when it comes to issues like marijuana and homosexuality and other key social issues. What Americans should be allowed to do in the privacy of their own homes.

And instead big government Neoconservatives, have embraced progressive prohibition as it relates to marijuana and harder narcotics. Which is just one example of why the Republican Party is having such a hard time right now appealing to young voters, because the neoconservative wing of the party is seen as big government paternalists. Who want to control how they live their own lives and young people now tend to be liberal-libertarian on social issues. Prohibition on its face is a progressive-paternalist idea. “That individual freedom is dangerous and when people have the freedom to make their own decisions, they make mistakes that s harmful to society.” This was the case with alcohol prohibition in the early 20th Century and is the case with Progressives who want to band tobacco, junk food and soft drinks today and even marijuana in some cases. And yet now we see people on the right embracing the same thing which is prohibition.
Papa Giorgio: Dennis Prager Reads About Colorado's Drug Issues

Posted by Erik Schneider at 1:46 PM No comments: Links to this post