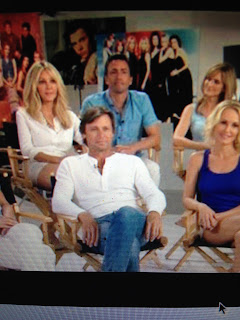 I only caught the last couple seasons of Melrose Place, because at first I thought the writing was kinda cheesy. And I’m not a big fan of soap operas to begin with, but I was flipping around one Monday night, in I believe 1997, looking for something to watch before Monday Night Football. Which at that point I watched every Monday night and I caught a little of Melrose Place and I figured what the hell, I would watch a little of this before the game. And I couldn’t stop laughing, it was a very funny show with people constantly screwing over other people and doing it in such a casual way and the writing of it was actually pretty good.

I’m not a soap opera expert obviously, but I think a good soap opera has all the selfishness and people screwing others with very little fear about the consequences for themselves or the people they are screwing. As well as the crazy lives that only people in Hollywood could live and write into a script. But a good soap opera has great writing, very funny writing and very funny people in it. Which is why I’m actually a late, but definite fan of General Hospital, because that show essentially has a cast for comedians or comedic actors. Who are also great actors and combine both roles very well. People who improvise and with writers who give them great lines.
ABC News: Nightline- Bill Weir, Melrose Place Cast Reunion

Posted by Erik Schneider at 3:50 PM No comments: Links to this post