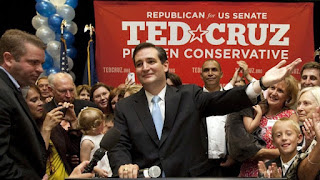 Bare with me for a minute, this will be my first ever attempt to write a news brief, that I'm going to put on a blog. I figure what the hell, its another slow news day and there isn't one story thats been reported today that I'm willing to write anything in depth about. So I'l combine several small stories into one hopefully medium size story.

Ted Cruz, won the Texas Republican Senate Primary last night and will most likely win that Senate election. Considering at this point there might be more Cowboys than Democrats in the Lone Star State. Ted Cruz, was endorsed by Sarah Palin, which means another mental patient will be heading to Congress. probably to keep Michelle Bachmann and Dennis Kucinich company in the Congressional Crazy Caucus. Now hopefully Sarah Palin, will get into the act and run for Congress herself. House or, Senate it doesn't matter to me. Then she'll know what its like to serve with other people who speak about issues they don't understand. And learn what not to say about things and what not to do. So far in her entertainment, I mean political career, she's been doing the opposite, so a change of pace would do her some good.

Also in the news, India a country of over 1B people, they have so many people, its not possible to count them all. It would be like trying to track down the entire population of a continent and I'm not talking about Antarctica either. Was without power, but they are back online now. Now, only 70% of the country doesn't have power. The House of Representatives, is set again to vote down middle class tax cuts. Vote for tax Hikes for the middle class and more tax cuts for the wealthy. Look, its a Republican controlled House, just thank God even if you are an Atheist, that they don't control the Senate and White House as well. Their message being that, "if you don't like high taxes, make a lot of money. Otherwise we are going to punish you for not being rich." Good luck selling that on the campaign trail. "Once you make a lot of money, you'll get to keep most if not all of it and we'll even take money away from people who actually need it and give more money to you.

In other Congressional news, the Senate once again voted to do nothing. As Senate Republicans, once again blocked a judicial nominee of President Obama's. In a statement released by Senate Minority Leader Mitch McConnell, the Minority Leader said. "that once the President sends up appointments to the bench that we like" meaning right-wing Republicans in Senate speak, "and changes his party affiliation to Republican, Senate Republicans will be prepared to vote on these judicial appointments." In more Congressional news, Democratic and Republican Senators during the August Congressional recess, will be taking a two week course on how to legislate and vote on bills that reach the Senate floor. Because its been such a long time since they've done either. They've forgotten how to.

And thats a brief on what's going on in the World today for August 1, 2012 I hope you are more or less informed.

Posted by Erik Schneider at 12:50 PM No comments: Links to this post