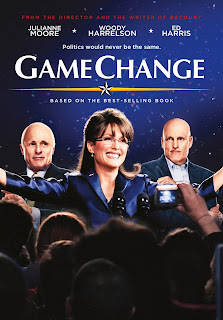 This piece was originally posted at FRS Daily Press

I saw the movie last night about an hour of it actually. I think Ed Harris did a good job of playing Senator John McCain and Woody Harrelson did a good job of playing Steve Schmidt and Sarah Palin was clearly not up to the job of Vice President, or President right now. But we knew that four years ago, so even the facts that were in the movie were not new. We knew that the McCain Campaign didn’t do a very good job of vetting Sarah Palin. Basically a little known Governor of Alaska, who may feel she lives in a foreign nation. Because of how isolated Alaska is with the Continental United States. But I have a hard time believing that Steve Schmidt and company would only spend 72 hours researching someone they barely knew if at all, because these people are way too smart for that. And that Senator McCain wouldn’t know how little research they did on his vice presidential nominee. The most important decision that a Presidential Nominee will make.

To take this movie at face value, you have to assume that the McCain Campaign was throwing a Hail Mary. Expecting to lose the presidential election to Barack Obama and that they needed someone who the Republican base would like personally, someone who could match Barack Obama when it comes to personality. Someone that would be seen as a political celebrity. If that’s what their goal, then they’ve more than succeeded. Because Sarah Palin is a political celebrity today, thanks to Senator John McCain. She has 100% name ID and is probably the most liked Republican in the party personally.

But McCain and company paid a heavy price for it politically. With Governor Palin not being able to answer questions that a high school or college student could answer. Like what is the Federal Reserve and making statements that a high school or college student know aren’t true. Like the Vice President being the Leader of the Senate. Julianne Moore is a fine actress, but way too upscale to not sound like an elitist. Not intentionally to play Sarah Palin. They would’ve been better off using Julia Dryfuss or even Tina Fey to play Palin. Not a very good movie and definitely a movie not a documentary. And probably light on facts as well.
The Young Turks: Ana Kasparian & Cenk Uygur- HBO's Game Change Preview
Posted by Erik Schneider at 6:35 AM No comments: Links to this post