Passionate Patriots: 1960 DNC: JFK Teams Up With Rival LBJ- Leadership For The 1960s 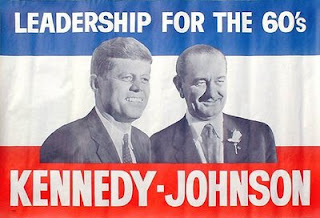 1960 was the last presidential election where a Vice Presidential nomination was the difference in who was elected President. Because Jack Kennedy already had the votes of the Liberal and Progressive Democrats. Especially in the North who could care less about Senator Kennedy being an Irish Catholic Northeastern Liberal from Massachusetts. But because of those factors Southern Democrats who are Conservative Republicans today, weren't convinced that Jack Kennedy was acceptable enough to be President of the United States. Which is why Lyndon Johnson who was also the Leader of the Senate at the time. Was so critical to this ticket, because he was a Southern Democrat at least regionally.

But LBJ had  progressive leanings like on civil rights to use as an example. But didn't push those positions much in the Senate except in 1957, when Leader Johnson was already considering running for President. When he pushed through a civil rights bill in the Senate, but that was voluntary. Because Johnson knew that he would need Northern Liberals to win the Democratic nomination for President. So Jack Kennedy and Lyndon Johnson needed each other or people like the other one in order to win the presidential election. Kennedy needed a Southern Democrat as powerful as Johnson, but there weren't any Democrats as powerful as Johnson at the time. And had Johnson won the Democratic nomination and he got real close, he would've had to of selected a Northern Liberal like Jack Kennedy as his Vice President.

With the Kennedy-Johnson ticket, this meant Democrats could win both the Northeast and South, as well as California. Because Kennedy could work the liberal states and Johnson could work the Southern states. Because the Northeast was probably going to vote for Kennedy anyway, but with Johnson on the ticket, Johnson could convince Southern Democrats that an Irish Catholic Northeastern Liberal was acceptable enough to be President of the United States. And Senator Kennedy's speech to Southern Baptists in 1960 in Houston where he came out for being in favor of Separation of Church and State and that he wouldn't take orders from the Pope in policy and decision-making.

In some ways Democrats in 1960 had a dream ticket, with the future of the Democratic Party. A real superstar in the best sense of the word, not a flash in the pan running with the most powerful Democrat in the country. Someone who was more than qualified to be President of the United States 1960. This not the last or first presidential election where the Vice Presidential nominee was important. It was also important in 1952 with Richard Nixon, 1976 with Walter Mondale, 1980 with George Bush, 1992 with Al Gore, 2000 with Dick Cheney, 2008 with Joe Biden. But 1960 was the last one where the VP nominee was able to deliver votes and states for the ticket.

Posted by Erik Schneider at 3:16 PM No comments: Links to this post