John Fitzhamh: The 1979 Iranian Hostage Crisis: The Start Of the War on Terror? 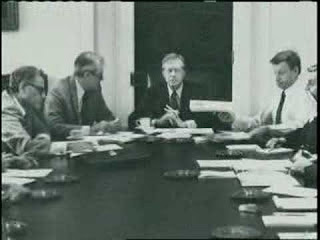 As well as take an American presidency hostage. President Carter as well and probably crushed whatever hope he had left in getting reelected in 1980. Especially with Senator Ted Kennedy announcing that he would run for president in the Democratic primary's. America in this period was already going through a very rough period especially economically. With double figure unemployment and interest as well as inflation rates, with another recession. In 1978 as well as 1980 and was facing several other issues that all commanded the attention of the Carter Administration. But when you have American hostages in a foreign country especially in a country thats not friendly with where we had already closed our embassy there, thats job one. And you stay on that job until you (pardon the pun) get the job done.

The Carter Administration was on top of the hostage crisis and I give them credit for that. Despite all of the other issues they were dealing with. Like looking weak to use as an example with Russia invading Afghanistan a neighbor of Iran in late 1979. To try to install a communist government there. There are lots of reasons that led to the Iranian Hostage Crisis, none of them justified taking innocent people hostage. But most of them America's fault and the Iranians were justified in being angry at America. The main reason I believe being the Shah of Iran who was installed by the United States and United Kingdom. And could be removed and replaced at anytime the U.S. and U.K. wanted to.

And the Shah even though he was pretty progressive on economic and foreign policy and was a very bright man, was brutal dictator in how he dealt with political dissent in Iran. And this was a reason why the Islamic Revolution started in 1978 and took over the Iranian Government in early 1979. And the Shah fled to Egypt and an Islamic Theocracy was formed in Iran in 1979. And of course the Iranian Hostage Crisis in November 4, 1979. And even though the United States officially declared War on Terror in late 2001 after 9/11, I believe we were already in this war over twenty years earlier.

I believe the Iranian Hostage Crisis was the start of it in 1979. The U.S. Marine Barracks Bombing in 1982. Libya's sponsoring of terrorism in the mid and late 1980s in Lockerbie Scotland and other areas as well. And then you go to the 1990s with the first World Trade Center Bombing in 1993. As well as Saudi Arabia in 1996 and the East African Embassy Bombings in 1998. America was already in the War on Terror long before 2001, we just hadn't officially declared it yet.

Posted by Erik Schneider at 7:13 PM No comments: Links to this post