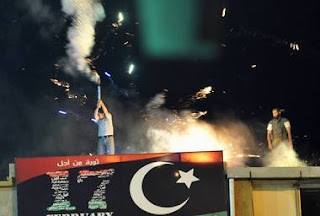 Now that it looks like Moammar Gadhafi's rule is over in Libya and the forty year reign of the Gadhafi Regime has fallen and now it just might be a matter of capturing, or killing Moammar Gadhafi, its not too soon to look ahead at what Libya could be in the future. Assuming that the Libyan Rebels the Transitional National Council of Libya are democrats. And not just another authoritarian faction trying to install its own version of authoritarianism and its own authoritarian regime. Libya has a lot of challenges unlike, Egypt which already has a functioning national government and it was just a matter of replacing the leadership. President Hosni Mubarak and his people.

Libya doesn't have that. They don't have a constitution, or other government institutions that can balance the country until a permanent government can take power. Actually Libya doesn't even have state or provincial governments, in a country thats physically the size of Iran a very large country. But with only 6M people, so whatever Transitional Authority emerges in Libya will have a lot of challenges facing it right way. Not just creating a new national government, but a national constitution, as well as establishing provincial and local governments. Because all of the power in Libya was based with the Gadhafi Regime in Tripoli.

I don't claim to be an expert on Libya and saying that this would be the perfect system and form of government for them. But when you're talking about a country that is this big one the largest countries in the world physically, that is deep in energy sources, a bottom up approach when it comes to government and governing under a national constitution could work well for them. Something like a federal system and federal republic. Which was created in Germany almost seventy years ago, as well as Italy. Where you create twenty or so states and provinces with their own democratic government's that are accountable to their own people. With local democratic government's within the states, or provinces.

With the democratically elected federal government based in Tripoli that handles national affairs. Foreign relations, national security, interstate crime, security, the currency, economic development, financial aid to struggling communities, things that typical federal government's deal with in Canada, America and Europe. With a national constitution that lays out certain basic fundamental rights for the people that is hopefully secular, at least in nature, while protecting freedom of religion for everyone. As well as lays out the responsibilities for the national executive, legislature, independent judiciary and the relations between the federal government and the states and localities.

Libya is going to have to build a health care system, an education system, law enforcement, a judicial system, a military that can responsibly defend this large country, that doesn't violate human rights. Rebuilding Libya, or just building Libya won't be as challenging as building Afghanistan, which perhaps has never really had a national government. And Libya does has a very large supply of oil and could be if its not already an energy independent nation. So they do have some resources that they can use to build up their country and develop a lot of it. Because a lot of Libya has never been developed, one of the reasons why it only has 6M people in a land the size of Iran. The Gadhafi Regime never put in the resources to develop Libya to its full-potential.

Libya is yet another country that the United States shouldn't step in and try to occupy. Its about time that we learn our lessons from Afghanistan and Iraq. But what we can do with NATO, the United Nations, the European Union the Arab league, with the permission of the Libyan Transitional National Council, is to work with them to develop its country. With trade agreements, lifting economic sanctions on Libya, foreign aide so they can build up their schools, health care system, help them develop their legal system and governmental institutions.

But the TNC and the Libyan people need to figure out what type of country they are going to have in the future and the international community can help them reach that. Like stabilizing the Libyan oil industry, which would help them develop their country and provide the financial resources to do so. Its great that Moammar Gadhafi is out of power and at least not running that country anymore. But this won't be over until he is captured and then the Libyan people can move on build their own Libya the way they want to and become a valuable player in the international community.

Posted by Erik Schneider at 6:59 PM No comments: Links to this post